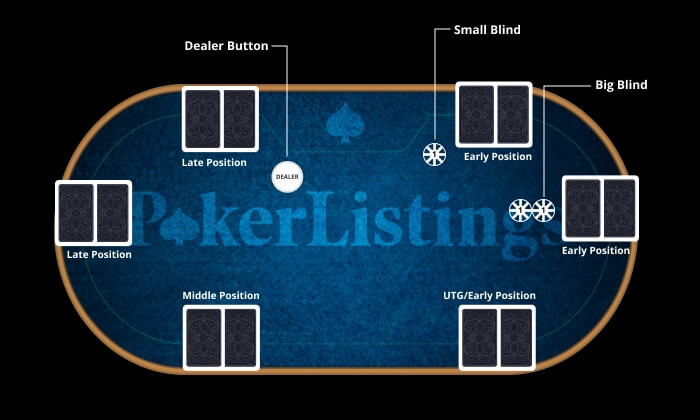 As a poker player begins to become familiar with this card game, they will discover the elements that make up a game . Beyond the combinations of poker hands , the value of each of them or aspects related to the rules of the game, there are other elements to take into account. One of them has to do with position at the poker table .

In fact, each of the positions occupied at the table will determine, to a large extent, the way each player acts. In this sense, one of the key positions in poker is the button , which we are going to talk about in more detail in the following paragraphs. In this way, you will be able to know the advantages and disadvantages of playing from that position.

What is the button in poker

The button or “button” is the position that a player occupies at the table and that is represented in the form of a chip, normally with the label “dealer”, which would be from where the cards are dealt in each round .

The differentiating aspect of the button is that it appears located in the last place on the table, so it will give the player who is in that position the “theoretical advantage” of always being the last to decide after the flop .

In any case, this position changes as the games unfold. That is, all players will go through the position of the button every so often.

Pros and cons of the button position

Being located just before the blinds makes the player the last to speak during that round, allowing him to “be in position” or, what is the same, to be the last to act after the flop .

In other words, the player in button position in poker is in a privileged situation , being able to adapt his strategy to play with greater guarantees and steal the blinds as long as the hand arrives clean.

Playing from the button, therefore, opens up a range of possibilities for the player who occupies that place, but it also entails a greater risk in certain situations or contexts.

The first thing you need to know about this position when playing at a Texas Hold’em table is that if you take this seat you will end up facing three or four opponents at the most . This means that the difficulties that you can find in the first positions, having to face up to a dozen opponents, disappear here.

At the same time, the participation of the player in question is greater, so his influence on the future of the game can take him in very different directions . In this sense, there is the possibility that the hand does not come clean and that the bet rises exponentially. If you have a high-value hand, making a re-raise could lead you right into having to go all-in, something you may not be ready for.

A fundamental trait to be able to face the game from this position with guarantees is to have a great ability to intuit what can happen after your action , since the decision you make can completely change the dynamics of the table.

On the other hand, poker experts usually recommend playing most hands aggressively in this position , since you can play raised hands without having to re-raise or even make raises if you have a very powerful hand a priori.

In this sense, the investment in the position of the button will always be reduced , since the player has the option to fold if there is a raise that is not interesting with his hand or, otherwise, to choose how to play if the postflop anticipates a promising hand.

Finally, and always considering the implicit randomness in each hand, we can point out that the position of the button, without a doubt, is the most advantageous in a poker table .

The key aspect has to do with two aspects. First of all, the actions after the flop, in which the player in this position will always be the last to decide . And, second and last, the percentage of hands that the bettor should play in that position, which will be greater than the rest.