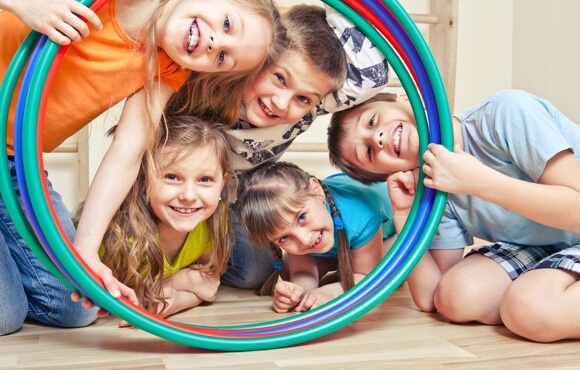 Games for children that integrate teamwork

Classroom teachers can play a variety of cooperative games with their students to help them learn to get along with their peers. Games that focus on teamwork skills show children how to solve problems in an environment where everyone is a winner, no student is left out, all children come together, and everyone has fun.

This game, described on the Fun Attic website, involves teams of four children working together to pass a volleyball to another team. To start, give each team a large blanket. Have each member take one of the corners. Space the teams about five feet apart from each other. Place a volleyball in the center of Team One’s blanket. When both teams are ready, tell Team One to “take” the ball to Team Two. Players must work together to lower the blanket and lift it up with enough force to get the ball to Team Two. Team Two must try to catch the ball with the blanket. If they fail, place the ball on one of the blankets and let the teams try again.

Frozen Beanbag is a game described on the Games Kids Play website. To start, provide each player with a small bean bag. Tell the children to spread out before the game begins. Tell the children that when you blow a whistle, they should put their bean bags over their heads and start walking around the area. If a player’s bean bag falls off their head, they must be frozen. If another player can help his friend by replacing his beanbag without losing his own, both players can keep moving. After five minutes, stop the game and gather the players. Have the players discuss how many times they helped a friend and how many times they were helped.

This game, provided by Anne-Marie on the Games Kids Play website, can be played by a group of about 10 students. Have the children stand in a circle. Select one of the children to be the leader of the game and give them a soft Koosh ball. Have him choose a player standing on the other side of the circle, say her name out loud, and gently toss the ball to her. After catching the ball, ask her to choose another person standing in front of her to throw the ball to. Continue the game, having the children throw the ball to someone new each time, until the game leader is the only player left to receive the Koosh ball. At this point, have the game leader start again by tossing the ball to the same person they tossed it to at the beginning of the game. Have each player continue to receive the ball, and then throw it to the same person who received it during the first round. Players must pay attention to know when it is their turn and remember who to pass the ball to. After a few successful rounds, you can choose to speed things up and see how many times you can pass the Koosh ball without it falling.